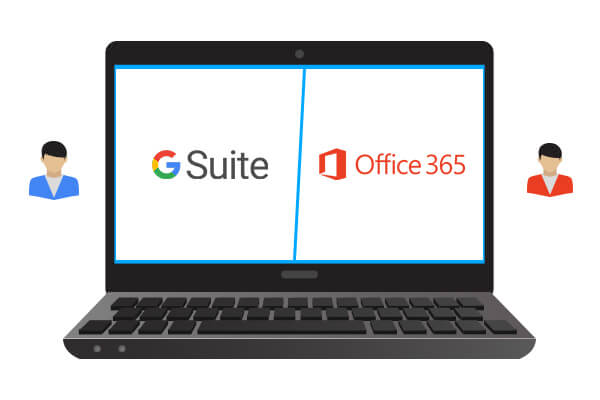 In this digital transformation, organizations have only a few choices when it comes to messaging and collaboration platforms or say “cloud office” for their organization. Two of the most chosen solutions are

A leading analyst firm predicted that the transformation of users from on-premise office systems to cloud-based offices would grow at a rate of 28% annually to reach around 695 million users by 2022.

It is always tricky for any decision-makers or IT departments to select one of the two. In this article, we will try to analyze both the impressive technologies from various aspects and present our comparison matrix to help the IT professionals or decision-makers to take their decisions.

Google launched Google Apps for Work sometime in 2006 as an entry point to the enterprise messaging market. The objective was to provide a cloud-based messaging platform as a SaaS model. It ensures that organizations no longer need to worry about hardware, software licenses, upgrades, etc. that were normal in messaging platforms in those days. In simple words, the only thing the organization pays is for the accounts, and the rest is taken care of by Google. The entire model from being a CAPEX model transformed into an OPEX model as the customers were now allowed to pay as per usage monthly. It was a paradigm shift for the organization adopting this technology as TCO would show considerable savings over three years.

One of the things that I always share is that Google Apps/G Suite was born in cloud technologies compared to its competitors.

For example, a logistics company in India who were using Lotus Notes as their messaging platforms was facing the following challenges.

The above problem may not be related to Lotus Notes, but maybe how the entire Lotus Notes was configured or lack of expertise in the team.

When we deployed Google Apps for the organization, within two months, the number of IT members required to manage the messaging platform was 1. The remaining 14 were transferred to different IT projects within the organization.

G Suite, over the years, has matured to be one of the most popular messaging platforms. Some of the features that users like myself appreciate

With the massive success of Google Apps, which converted the existing Microsoft customer base to Google Apps, it became a challenge for Microsoft to ensure it retains its customer. Microsoft launched Office 365 in 2010, combining many of its existing technologies such as BPOS, Exchange Server, Lync, and Sharepoint to the Office 365 suites. As it indicates, it was an attempt to take the existing technologies that were best suited for on-premise to cloud. It added many of its earlier challenges to increase the migration of Office 365 among its customer base.

With time Microsoft worked hard and added a lot of innovations to make it a cloud-ready one-stop solution for business productivity, collaboration, and messaging. This changed approach helped Microsoft jump multifold within a small period to capture 80% of the market share.

It was difficult to believe that Microsoft being a late entrant, was able first to reach the Google Apps benchmarks and then became the ubiquitous champion in the market.

From an enterprise perspective, they view Microsoft as an enterprise-ready solution compared to its competitors.

How to choose between the two?

While the paper focuses on the two leading technologies in the space, we also suggest that the readers evaluate other options such as Zoho, etc.

One of the critical suggestions by top analysts, and I would second those is to request that the organization not spend too much time comparing features for both providers. There is not a big difference between both from a features perspective. Though there will be many who may not agree with me on this from functionalities required by the end-users, they both score well.

Let me list the factors that may be considered while deciding to select a particular technology on the other.

Many of the organization 's are used to Microsoft Outlook or Microsoft Office applications. From our experience, they may be the one who presents loud resistance to change to G Suite. One of the recommendations is to keep these users on MS Office and MS Outlook.

See how CloudCodes can secure your enterprise systems and data today.